Posted by Alex Brightsmith on May 18, 2014 in Ramblings, Reviews

I’m really not a consciously analytical reader, and that’s a shame.

There are a few books, books that I’ve known for a long time, books that I’ve read again and again (books like Nevil Shute’s Lonely Road, for example) that I’ve actually thought about enough, over time, to write a bloggable review of.

There are extraordinarily rare books, seriously strike-you-between-the-eyes books (books like Jedediah Berry’s The Manual of Detection, for example) that I have fallen in love with abruptly and utterly, without preconceptions, and been impelled to share immediately with the world.

And then there’s my overdueareview shelf, over on Goodreads. Except for one (which is there because one day, when I’m feeling flame-proof, I’m going to write a careful, balanced, detailed, three-star review of it) they’re there because I love them and want to write for them the long, thoughtful, bloggable reviews that they deserve … but they will be old friends before I can write the reviews they deserve (some of them, you will realise at once, are already old friends, and I still haven’t reviewed them), and they deserve so much more than a long, thoughtful, unwritten review, so I think it’s time that I admitted those long reviews aren’t going to happen any time soon, and made a start on the backlog.

The Lives and Loves of Hana Lee, KP Webster I ducked reviewing this book for a long time because the reasons that I didn’t love it absolutely have a lot more to do with me as a reader than with the book. It’s inventive, compelling and beautifully written – so much so that I read it and enjoyed it despite my prudish tendency to scud through sex scenes as if I’m peering through my fingers at the gory parts of a horror movie. And there is a lot of sex, plot-relevant, and hardly unexpected to anyone who has read the blurb, but sadly not my cup of tea. Sadly, because this is a well-told tale, and exuberantly imaginative, though for me it felt a little uneven with some tantalisingly unexplored strands and ideas.

Marriage by Mistake, Alyssa Kress I picked this book up last July, way outside my comfort zone, as part of a rash and ill-thought-out challenge that I had imposed on myself, and I loved it unreservedly – even the sex, and that, as you’ll have gathered, is quite an achievement. Neatly overcoming my commonest objections to romance with a tarnished female lead set on winning a man who is actually worth winning, and an ingenious impediment to her success that is both genuine (if unlikely) and genuinely overcome without once making me shout ‘just bloody talk to one another’ at the screen (I am not a romance reader), this might be light but it’s completely engaging, and I’m not ashamed to give it five stars for excellence of its type.

Bob Moore: No Hero, Tom Andry Another product of last July’s challenge, this is a comic fantasy that never abandons narrative sense for a cheap laugh. In a neatly and comprehensibly imagined world superheroes are an accepted fact of life, but life goes on, and normal people also have stories to tell.

Worlds Unseen, Rachel Starr Thomson In an evocatively imagined, not quite Victorian, world of steam trains, swordsticks and strange abilities, Maggie Sheffield makes a promise she can’t begin to imagine the consequences of … damn, it’s been too long. It’s lodged in my head, which must be good, and the characters still spring to mind, but I can’t seem to remember anything beyond the tone and that the tale was competently told, and I hate to damn it with such faint praise.

If you enjoyed this, why not share it with your friends? 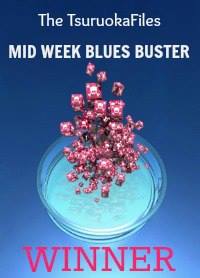 The adventures of a dad of three, beginning to explore the world of writing.

Musings and books from a grunty overthinker

The Daily Tales of Gregg Savage

Every day, I write a unique story for you to share and enjoy.

Art doesn't have to be worthy

to be worth sharing

Tales of humour, whimsy and courgettes

defining the words that define us

On sports and life and other topics at hand ...

Life through the eyes of a mum, wife, woman